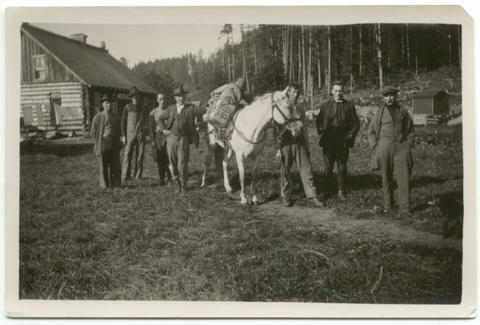 Taking dynamite to Fitzsimmon's copper mine

A later annotation on one of the copies, probably made by museum staff claims "Summer, 1918." Photograph 1989_0982 Philip appears to have been taken at the same time as this one. In 'Whistler Reflections' 0982 is labelled '1916', however we do not know where this information came from.

The photo shows the Main Lodge prior to construction of the dining hall and instalation of dormer windows.

2 copies stored with the original

All enquiries regarding use, reproduction and publication should be addressed to museum staff.

Extending the railway to the copper mine was briefly considered until a mining engineer deemed the mine not worth the endevor.<sup>1</sup> Hence the use of pack horses.

<sup>1</sup> Research by Tim Cornish from interviews with Myrtle Philip, 1982.