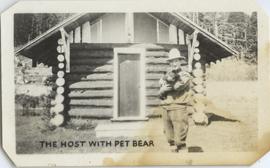 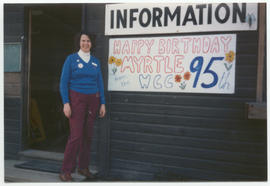 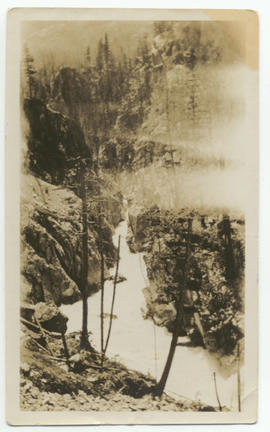 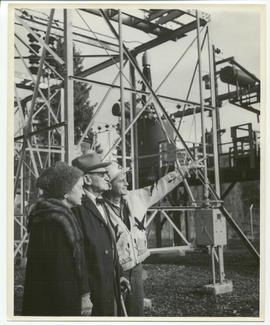 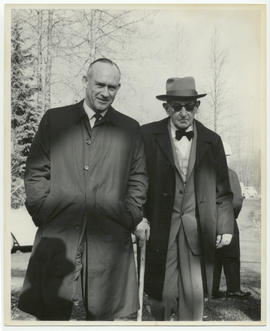 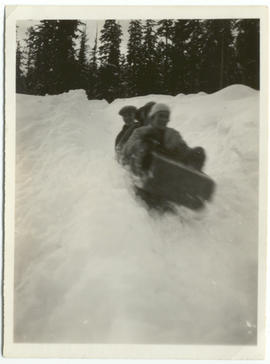 Myrtle Frances Tapley was born to a family of New England seafarers on March 19th, 1891 in the eastern United States. She studied at Bluehill - George Stevens Academy to become a schoolteacher where she boarded with the Philip family. It was there that Myrtle met her future husband.

Alex was working on the West Coast of British Columbia with his father at the time but was returning home for the holidays when he and Myrtle literally ran into each other as he entered the front hall. They were inseparable for the week that he was home, going on hikes or having picnics together every day. For the next four years Alex and Myrtle corresponded faithfully by letter (Myrtle worked in teaching positions in the Brooksville schools) and in 1909 Alex sent for his bride-to-be. The two were married in 1910, St. Helen's, Oregon and decided to settle in British Columbia.

Myrtle was an avid contributor to the spirit of the growing Alta Lake community. She started the Alta Lake Community Club and played an integral role in the development of the Valley's first school. Although Rainbow Lodge was sold in 1948, Myrtle continued to be a prominent figure in the Whistler Valley until her death in 1986. Mrs. Philip's extensive contribution to the development of this unique resort town is still evident today. She was a member of the Alta Lake District Ratepayers Society for many years. For some years she served as the Secretary for ALDRA.

In 1983 Myrtle moved to Hilltop House Senior Home in Squamish. She is buried in Whistler.

The fonds consists of personal papers of Myrtle Philip, including education documents, journals, diaries, banking records, certificates and passports, legal and property records, correspondence, birthday and recipe books, postcards of the Alta Lake/Whistler area, scrapbooks, reference material, and photographs. The photographs depict the Philip family, people (including guests at Rainbow Lodge), events, and scenes of the Whistler area. The fonds includes Alex Philip's manuscripts, as well as records relating to his estate. The fonds also includes records of Rainbow Lodge, including guest registers (1915-1947), a cashbook (1928-1952), employee records (1941-1948), invoices, and receipts.

Donated by Florence Petersen on behalf of the deceased Myrtle Philip.

Arranged according to original order.

All inquiries regarding use, reproduction, and publication should be addressed to museum staff.