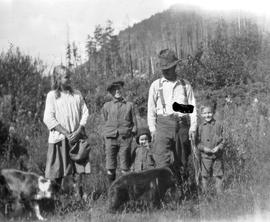 Photograph of the Jardine / Neiland family with a black bear cub. The cub is likely "Teddy" the bear, who was raised by Myrtle & Alex Philip in the summer of 1926. A dog is also featured in the picture. From left to right: Jenny Jardine, Jack Jardine, Thomas Neiland Jr., Thomas Neiland Sr., and Bob Jardine.