Memoirs written by Jenny Betts (nee Jardine) recounting her life, starting from her birth in 1912 and finishing with entries written in 1982 celebrating Lizzie Neiland's 100th birthday. Jenny recounts her family's many moves, the death of her father, her mother's remarriage to Thomas Neiland, the logging operation and daily life in the Whistler Valley (at Mons, Alpha Lake, 34 1/2 Mile [Function Junction area], and Nita Lake), the birth of her brothers Robert and Thomas, her Uncle Jim Laidlaw's time in the valley, meeting and marrying Wallace Betts, logging work at the Alaric operation at Parkhurst, tobogganing, raising her children, flooding in the early 1940s, her brothers' service in World War II, the family's time at Port McNeill on Vancouver Island living at a work camp Wallace was working at, her appendicitis operation and hemorrhages which required a blood transfusion from Wallace, Thomas Neiland's passing and the selling of the 34 1/2 Mile property in the 1950s.

After many blank pages, there is an entry from December 19-28, 1981 recounting a large holiday get-together with the extended Jardine family in the Lower Mainland (each couple travelling from several places in BC to join). The following page is an entry written by Jenny on February 22, 1982 describing another large family get-together with the Jardine clan at a nursing home to celebrate Lizzie Neiland's 100th birthday with some champagne. 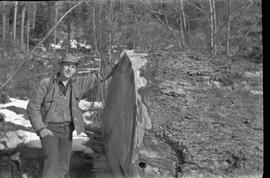 Photograph of Robert Jardine standing next to a large felled tree. The inscription on the verso reads "Bob Jardine at Horstman's, Alpha Lake, Hydro right of way log. 1940." The tree, which stood on Harry Horstman's property, was felled by Horstman on the request of the PGE Railway who felt it was in danger of falling on the tracks.