Set of documents relating to the bankruptcy of the Function Junction sawmill owned by Edward Thomas. The first page lists the assets and liabilities of the debtor and contains brief information about the mill. The second and third pages contain lists of creditors and how much is owed to each. The creditors include Wallace Betts and Thomas Neiland Sr. and Jr.

The sawmill was located at 34 Mile, on the right of way of the Pacific Great Eastern Railway [Function Junction area]. It had insufficient power to operate to capacity, and a new power plant was under construction but had not yet been completed at the time of bankruptcy.

Postcard labelled "High Street, Kinross" sent from Thomas Neiland, Jr. to his parents, Thomas and Lizzie Neiland, during his time with the Royal Canadian Air Force in Scotland. On the front of the card is a black and white photograph of the High Street in Kinross, with a building marked 'Post Office' and a tall clock tower in the foreground. There is also a purple oval stamp, partially faded, marked "R.C.A.F." and dated February 26, 1944. On the back of the card is a handwritten message from "Tommy" to his parents at 34 1/2 Mile. The card has no stamp. It is postmarked February 26, 1944, Field Post Office.

Appears to be a later print taken from the original negative. 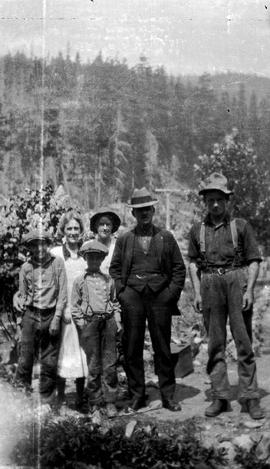 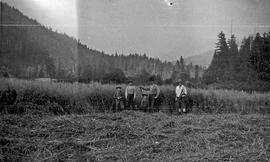 Jardine / Neiland family in front of a flatcar 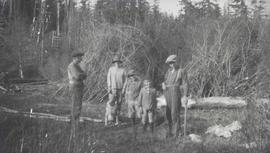 Jardine / Neiland family in front of piles of brush