Photograph of Jenny Betts with her children Louise, Sam, and Jerry and a cousin of the children's, Alfred. The annotation on the recto reads "Us again" and on the verso reads "Janet Betts, Louise Betts, Sam Betts, Jerry Betts, Alfred Betts (cousin), about 1947 at 34 1/2 mile."

[Bob] and Jenny Jardine in a row boat

Photograph of [Bob Jardine] (left) and Jenny Jardine (right) in a row boat. The lake may possibly be Logger's Lake. 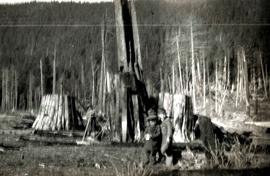 Children in front of tree stumps, clearing land at the Jardine-Neiland property

Photograph of two young boys, almost certainly Thomas Neiland Jr. and Bob Jardine, standing in front of some large tree stumps during the clearing of the Jardine Neiland property at 34 1/2 Mile [Function Junction area]. Jenny Jardine stands in the background.

Postcard labelled "Easter Cheer" sent from "J.B. + M.B. A.B." in Pembroke, Ontario, to Miss Jenny Jardine at 34 1/2 Mile. The front of the card has an image of a pastoral riverside scene ringed with flowers and a Christian cross in the top right hand corner. Also on the front of the card is a printed message; "Sunny bright / with joy and cheer / May your Easter / hours appear."

On the back of the card is a handwritten message from sender to Jenny Jardine. There is a yellow one-cent Canadian stamp in the top right corner. Card is postmarked March 31st 1926, Pembroke, Ont.

Postcard labelled "Greetings from LAVERNE, OKLA." sent from Joy Smith to Jenny W. Neiland at 40 Mile. The front of the card has a tinted photograph of trees and flowers next to a lake, with hills or mountains in the distance. On the back of the card is a handwritten message from Joy Smith to Jenny Neiland. There is a green one-cent U.S. stamp in the top right corner. The card is postmarked June 14 in Laverne and June 19, 1941 in Alta Lake.

Group photograph of Jardines and Gebharts

Item is a postcard labelled "Horseshoe Bay, BC" sent from [Ins.?] to Mrs. Wallace O. (Jenny) Betts. On the front of the card is a black and white photograph of a marina in Horseshoe Bay, West Vancouver. On the back of the card is a handwritten message from the sender to Jenny Betts at Alta Lake. There is a brown two-cent Canadian stamp in the top right corner. The card is postmarked July 22, 1938 in Whytecliff, B.C.

Photograph of the Jardine / Neiland children outside the Neiland ranch at 34 1/2 Mile [Function Junction area], in front of a large tree stump. From left to right: Thomas Neiland Jr., Bob Jardine, Jenny Jardine (with dog), and Jack Jardine. 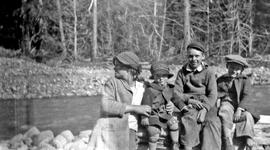 Photograph of the Jardine / Neiland children sitting on the bank of [the Cheakamus?] river. From left to right: Jenny Jardine, Thomas Neiland Jr., Jack Jardine, and Bob Jardine.