Several men are seen working on a construction site. A previous finding aid notes that this is the Express Gondola G4 Station, built in the summer of 1987.

Note the price along the bottom edge of the print. 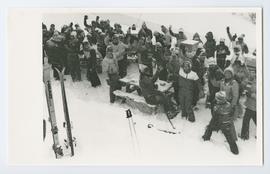 Despite driving snow, a large group of U.S. skiers are happily enjoying an outdoor picnic on opening day. 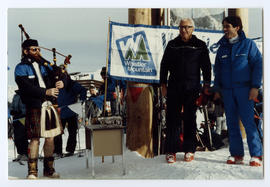 This photograph shows Franz Wilhelmsen (on left) and Lorne Borgal at the dedication ceremony for Franz's Run on Whistler Mountain.

A smiling group is shown posing in formal dress.

The annotation on the reverse of the print reads, "X'mas '82".

A ski racer is seen from the side, airborne in the tuck position, with a large crowd gathered behind him.

Notes in a previous finding aid identify him as Peter Meuller, from Switzerland, racing in the Molson World Cup Downhill in 1982. 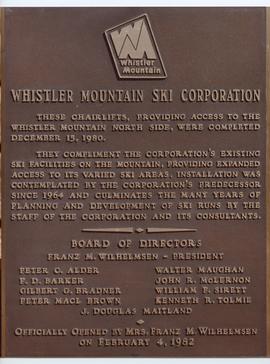 This photograph shows a brass commemorative plaque for chairlifts allowing access to the north side of Whistler Mountain.

Three kids are seen skiing the top of Harmony Bowl. Notes on the reverse of the print give a title for the print, "One Sunny Day Spring 1982," and identify the kids as follows: "Daren 8 yrs, Steven 10 yrs, Tyler 10 yrs."

A race course is shown lined with orange fencing. Large groups of spectators are lined up against the fencing.

A previous finding aid states that this is the Dave Murray Downhill course from 1982. 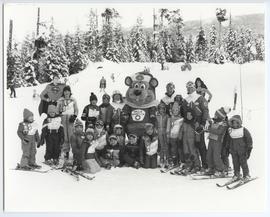 This photograph shows a group of Whistler Mountain Ski Scamps posing with a Willie Whistler Mascot.

There are two prints- an original, and one made from a copy negative.

Dave Murray is shown skiing. A typed note taped to the reverse of the print reads, "9: Ah, the joy of fresh snow. Whistler ski director Dave Murray gets in an opening day run."