Photographs taken by John Bartosik and "CS" depicting forget-me-nots and a grocery store, the former presumably inside the latter. 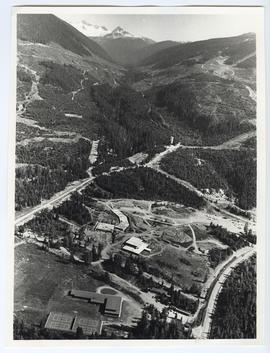 This aerial photograph shows Whistler Village in the development stages.

Construction of Village and Blackcomb

View of the village construction with runs being developed on Blackcomb.

The type at the bottom of this print reads, "Construction on the new Town Centre is already well underway. Rising behind the new buildings can be seen Blackcomb Mountain. It is due to open for skiing for the 1980-81 season."