Thomas Neiland Jr. crouching next to a thawing lake [Iceberg Lake?] in an alpine setting. 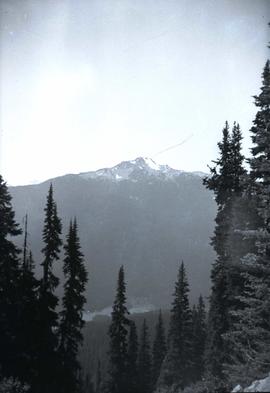 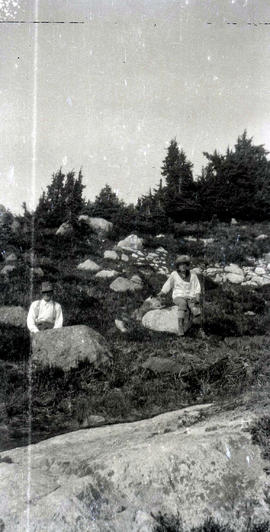 Jenny Jardine & Harry Horstman in the alpine [on Sproatt Mountain?]

Photograph of Harry Horstman and Jenny Jardine sitting on some rocks in the alpine, likely near Harry's cabin on Sproatt Mountain. 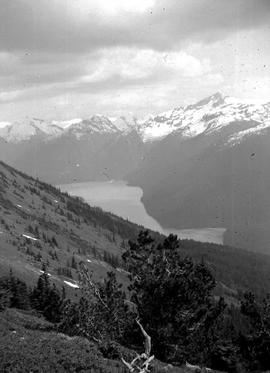 Photograph of Cheakamus Lake taken from the South side of Whistler Mountain. 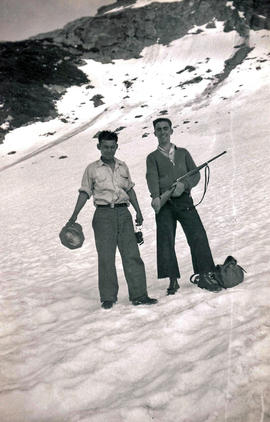 Man and Thomas Neiland Jr. in the alpine with guns

Photograph of an unknown young man (left) and Thomas Neiland Jr. (right, holding a rifle) on a snowfield in the high alpine in the summer time. 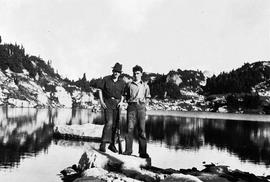 Letter from Jenny Jardine to Echo-Marie Fawks (nee Betts) and her husband, Don, written on April 7, 1995. In the letter, Jenny recounts her and her family's life living in the Whistler Valley between the 1900s and the 1940s - at Rainbow Lodge, Mons, Alpha Lake, and finally at 34 1/2 Mile [Function Junction area]. Stories she recounts include their relationship with the Philips and Harry Horstman, hikes on Sproatt Mountain and to Cheakamus Lake, mail delivery, schooling, scavenging berries along the Pacific Great Eastern Railway, and Howard Gebhart and her brothers' serving in the Royal Canadian Air Force during World War II. She finishes the letter talking about her recent trip to Northern BC, the Yukon, and Alaska. The letter was enclosed in an envelope with notes written by Louise Smith regarding the letter's custodial history. The letter was given to Louise by Echo-Marie (Louise's cousin), who lived with her husband, Don, in Whistler from c. 1990 to c. 2012.

Photographs of campers at the Toni Sailer Summer Ski Camp hiking, skiing, and relaxing on Whistler Mountain in 1980-1981.

Identification based on ADOUGLAS_03_011:

File contains 12 large, mounted photographic prints of people at the Toni Sailer Summer Ski Camp. These photographs presumably belonged to or were taken by Alan White. All photos are stamped on the back: "D. Duerks / 173 St. Paul Street / Kamloops, BC / V2C 2J1."