Margaret and Pierre Trudeau are shown stopped on a ski run, with several other skiers coming down the hill behind them. This photograph was taken on their honeymoon. 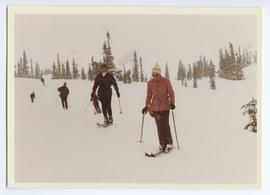 Pierre and Margaret Trudeau are shown skiing on a snowy day with a large group.

Margaret Trudeau is seen leading a pack of skiers down a run, with Pierre directly behind her. This photograph was taken on the Trudeau's honeymoon in 1971.