Photographs including but not limited to Prime Minister Pierre Elliott Trudeau's visit to Whistler Mountain; Skiing; Winter construction; freestyle skiing; Grouse Mountain Vancouver; the Posie Shoppe
02-014-33 on pg. 1. Caption: Prime Minister Trudeau a the bottom of the Olympic Run after a hard day's ski-ing on Whistler.
02-014-01 appears in April 18, 1979 issue on pg. 10 [L]: Caption: Don't look too closely! Highways crews work on a "suspended" section of the Cheakamus Canyon highway held up by logs.
02-014-26 on pg. 10. Caption: Some of the crumpled railcars and twisted track at the scene of the B.C.R. derailment.
02-014-52 on pg. 12. Caption: Champion Eaves exhibits fine form during the Labatt's World Cup Freestyle Aerials at Grouse.
02-014-10 on pg. 17. Caption: Highlands Mall and the Highlander Hotel as seen from the new Highway #99.
02-014-46 on pg. 20. Caption: The interior of the Highlands Mall showing the tropical plants in the mall itself.

Letter from Prime Minister Pierre Elliott Trudeau to Dave MacPhail of Whistler, thanking him for repairing a ski boot. It is typed on official stationery marked "PRIME MINISTER - PREMIER MINISTRE" with a Canadian coat of arms.

Pierre Trudeau is shown turning on his skis on a snowy day. This photograph was taken on his honeymoon.

Pierre Trudeau is shown skiing across a slope on his honeymoon.

Jack Bright Pointing out Area of Mountain to Pierre Trudeau

Jack Bright is shown pointing an area out to Pierre Trudeau and another skier. The tips of Margaret Trudeau's skis are just visible in the left side of the frame.

Pierre Trudeau is shown on the left hand side of a group of skiers. Jack Bright is second from the right in the foreground. This photograph is one of many taken on the Trudeau's honeymoon. 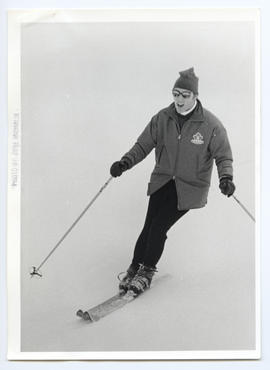 Pierre Trudeau is shown skiing with sunglasses on.

Pierre Trudeau is seen skiing down a run. This photograph was taken on his honeymoon.