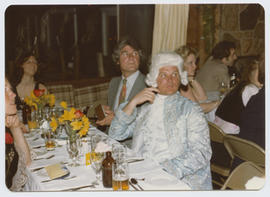 Zube at the Freakers' Ball

Photograph of Zube in costume at the Freakers' Ball at the Christiana Inn. Seated next to Zube is Jim Crighton and Claus. Joan and Pat Bramfield are seated on the table as well (Pat is at the end of the table.)

Caption on verso: "Claus - Joan - Zube in costume - Jim Crighton next to him - Pat Bramfield end of table"

Zoning Bylaw maps (No. 303) from the Resort Municipality of Whistler in 1983.

A chairlift is seen with a very steep mountain peak in the background. A previous finding aid identifies the location of this photograph as "Zermat, Switzerland".

Photographs of Pelion Mountain and Jack Bryan on Ossa Mountain in the Tantalus Range on July 25, 1960.

[Ektachrome is the type of film used.]

A booklet from the 2012 YWCA Women of Distinction Awards. The booklet has information about all the sponsors and donors of the event, as well as short biographies of all the nominees. The nominee of note is Ginny Dennehy who is nominated in the Community Builders category. Found in a scrapbook.

An advertisement for the YWCA Metro Vancouver Women of Distinction Awards. The advertisement includes the categories of the awards and images of some of the nominees, including Ginny Dennehy. Found in a scrapbook.

Article from page A19 of the Vancouver Sun with one article about Dag Aabye, entitled "Youngsters can't hold a ski to Dag Aabye," by Jack Rogers. The author shares several personal memories of Aabye. (Rogers and Aabye were both employed by the Whistler Ski School from 1966 to 1969.)