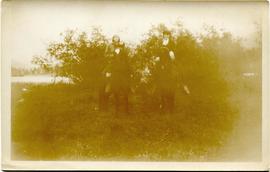 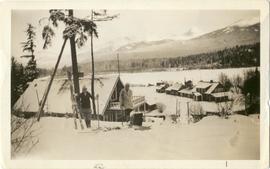 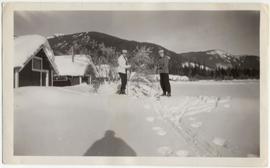 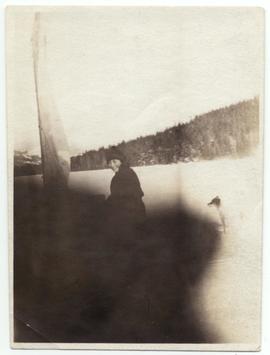 Myrtle with her iceboat

Myrtle Philip with her iceboat on Alta Lake. Dog "Puppy" to the right. Large shadow obliterates much of lower half of the picture. 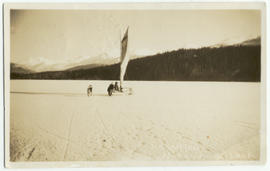 Postcard of two women on an ice boat on Alta Lake, a Dog walks nearby. The postcard has text on the front reading "Iceboating, Rainbow Lodge, Alta Lake BC". On the reverse the postcard is addressed to [Jeanne] Tapley at a Seattle address. The text reads "Dearest, will write you a letter next mail. Dad is fine now and is quite chirpy. I'll take him for a trip as soon as I can- I can take him to Victoria and leave him with M while I go on to you and arrange things then he could easily take the boat [over when we are] ready for him. I can't leave here till after Oct 29 [?] [?] duties and [?] [?], Best from Myrtle". Someone has at a later date written 1922 on the postcard, but the postmark is 30 Sep. 1925. Presumably the photograph the postcard was made from was taken in 1922.

Shows Skookum the dog, Myrtle Philip and her father Sewell Tapley. Myrtle is pushing Sewell while he shows her how to ride the ice boat.<sup>2</sup> 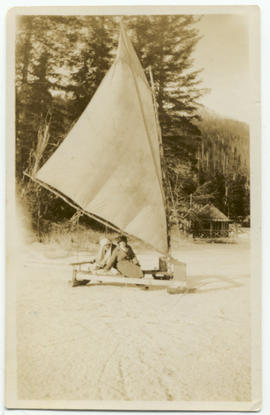 Photographs taken by Dorthy Helmer at Alta Lake in the 1930s. Photographs include staff, visitors, and people visiting or working at Rainbow Lodge.

These names are marked on the back of some of the photographs: "Myrtle Philip", "Gillespie", and "Helmer". 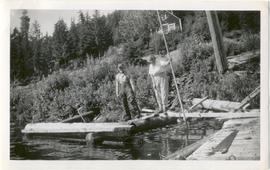 Philip Tapley and Myrtle Philip on the shore of Alta Lake. Inscription on verso: "Mrs. Philip + Phil Tapley (her brother) / 1949"

Series consists of 6 photocopied pages from two separate volumes of The Varsity Outdoor Club Journal, published by the University of British Columbia. Both sets of photocopies include the title page of the journal, a black-and-white photograph, and articles.

Photographs including but not limited to construction; houses; children; portraits; Don Goodall; Myrtle Philip; sewers; drinking at cabin; horses; speeches
Appears in May 17, 1984 issue:
02-405-A-3. Pg. 1. Caption:It will be 70 years to the day Friday that Myrtle Philip first set foot in the Whistler area. Mrs. Philip, who just celebrated her 93rd birthday March 19, and her husband arrived in what later became the community of Alta Lake in 1914 and soon built Rainbow Lodge, which served as a fishing lodge on Alta Lake. Last Monday, Grade 5 students from Myrtle Philip School, named in honor of Whistler's pioneer in 1976, gathered around Mrs. Philip at her home on the shores of Alta Lake.
02-405-C-5. Pg. 3. Caption: [top] Bill Donnelly, at-large director.
02-405-C-6. Pg. 3. Caption: [bottom] Russ Shepherd, lodgings director.
02-405-A-14. Pg. 8. Caption: [left] Peter Porteous, Waiting Unit, Brio.
02-405-A-21. Pg. 8. Caption: [middle] Don Goodalll, Unemployed, Whistler.
02-405-A-19. Pg. 8. Caption: [right] Megan Moore, Hotel employee, Alta Vista.
02-405-C-11. Pg. 9. Caption: Leaping horses, Batman! It's Bob Warner getting warmed up with his trusty steed for another season of trail riding at Whistler which starts this Thursday. This year Layton Bryson is running his operation from new stables at Mons.