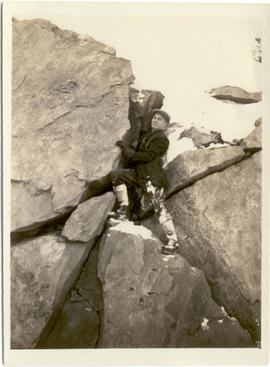 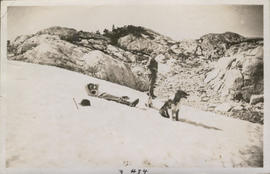 Two black and white photographs, glued to opposite sides of a piece of black construction paper. 12a shows two dogs, possibly Skookum (collie) and Kii, and two female Rainbow Lodge guests, high up in the mountains. One woman lies down in the snow as they both turn to smile at the camera. 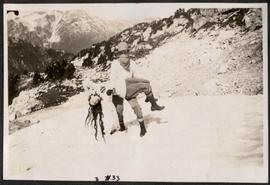 Two photographs glued back to back. The first shows Alex Philip with two female guests outside Rainbow Lodge. The second shows Alex and one of the guests play acting on a hike.

Photographs including but not limited to mural; railway tracks; hiking with dog; Sayward; Whistler Village
Appears in August 20, 1981 issue:
02-169-10. Pg. 3. Caption: RCMP Constable R. Beaudray and tracking dog Chimo pause for a moment on the third day of their search through the rugged bush near Green Lake. They were searching for clues after the clothes of a missing Maple Ridge teenager were found in the area.
02-169-30. Pg. 11. Caption: Neil James Band struts their stuff before an appreciative audience in the Village Square on Sunday Augutst 16.
02-169-4. Pg. 17. Caption: Larry Deal takes a break at Club 10.
02-169-32. Pg. [20]. Caption: [top left] FIRE! Lighting strike sets fire to Rainbow Mountain Ridge. Sunday Afternoon cocktail sippers got this view from Stoney's terrace.

Photographs of a hike to Black Tusk in December 1950.

Hanging out close to mountains and lake

Photograph of 3 men on rocks with lake and mountains in front of them. Glass slide framed with blue and yellow tape labelled S 9 [other label is faded, but a 4 can be made out].

Photographs of a helicopter in a meadow and in a construction site, a pitched tent, a hiking trail, people melting snow on a rock into cups, Garibaldi Lake in the winter, discoloured snow, an aerial view of Brohm Ridge, a provincial park restrictions sign including 'no picking wildflowers' and 'no cutting trees', a train station, a house in a forested area, a meadow and trees with forest fire smoke in the background, hikers on a mountain with Table Mountain in the background, a helicopter taking off in a meadow, 3 people sitting in a meadow that is covered with wildflowers, a hiker above a lake, a hiker on a slope, and 2 people collecting samples.