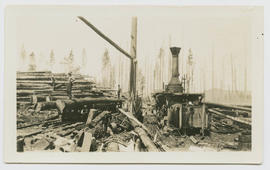 Photograph of the logging operation at Parkhurst, showing the railcar, a spar tree, and the steam donkey. The man standing on the log in the foreground is Ross Barr.

Photographs belonging to Ross and Alison Barr documenting their life at Parkhurst sawmill on Green Lake, Whistler. One comic poem about Parkhurst. 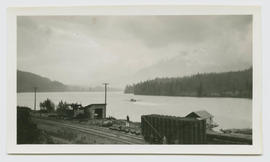 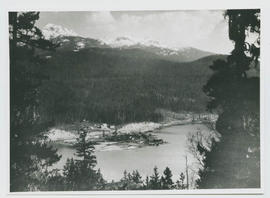 Copy of a photograph of Parkhurst taken from up on the mountainside across Green Lake. Inscription on the reverse reads "Parkhurst, Green Lake, Barr Bros Mill and Camp." 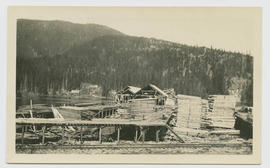 Photograph of timber air-drying at Parkhurst. More money could be made if the timber was ready-dried, but it was a lot of work to pile the wood so high, according to Norman Barr.

Textual documents relating to Parkhurst, dating back to the 1930s, which were donated to the museum by the Barr family.

And have the boys a plaything in the Parkhurst Pussy!

Comic poem written by Georgina Murray, daughter of Ma Murray of Lillooet. The poem is about the crawler tractor at Parkhurst. Although the tractor was actually of the brand "Cletrac" it was widely known as the "Cat" after the brand "Caterpillar". This poem was making a pun on the word cat, describing the machine as a pet. 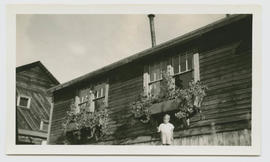 Photograph of Norman Barr outside the Barr family home built on the hill above Parkhurst. Note the window boxes; Ross Barr was a keen gardener.

The inscription on the verso reads "Parkhurst home 1935, (Norm)."