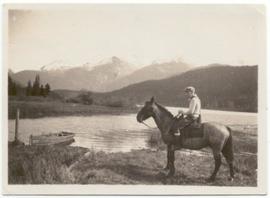 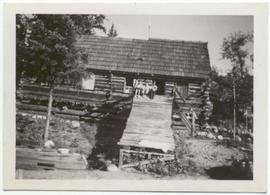 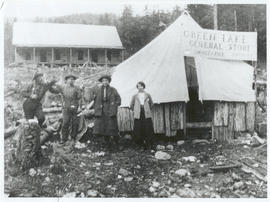 Photograph of a group of people standing outside the Green Lake store owned by James C. Rougier. The woman second from the right is undoubtably Myrtle Philip. The identity of the others is disputed. See General note, below, for details. 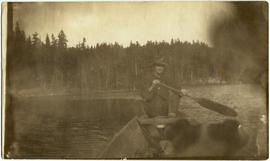 Alex Philip on a boat in Green Lake

Alex Philip in a boat on Green Lake.

Logs floating on Green Lake with Whistler Mountain in the background, taken during the construction of Highway 99 in July, 1964.

Green Lake during the construction of Highway 99 in July, 1964.

A small newspaper clipping with a photo of Ginny and Kerry Dennehy at a Green Lake memorial for Kelty Patrick Dennehy. Found in scrapbook.

Group of skiers on Whistler Mountain with Lost and Green Lakes

A magazine clipping of a photograph of a large group of skiers standing with their skis on Whistler Mountain. Lost and Green Lakes can be seen in the background. Several of the skiers are wearing Garibaldi ski bibs.