A group of people is seen posing with what appear to be plates after the Mouton Cadet Race.

With One of the Three Winners

Three people are shown posing with a pair of Blizzard skis in front of a sign that reads, "Enter here free draw".

A title is given by an annotation on the reverse which reads, "With one of the three winners." 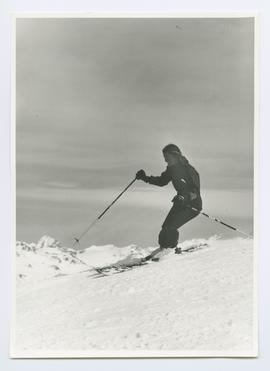 This photograph shows a smiling woman skiing against a backdrop that is largely composed of sky. 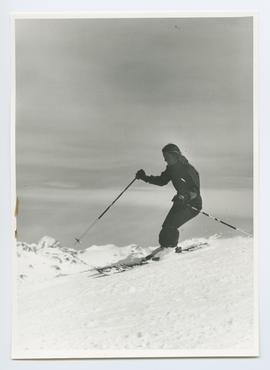 A woman is seen skiing down a race course. A previous finding aid identifies this as the slalom course during the summer camp held in 1971.

This photograph was published in the Whistler News on page 11. 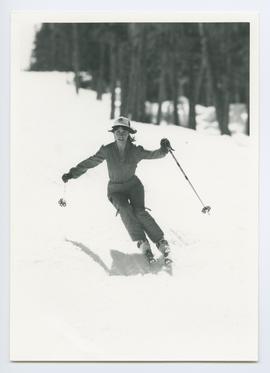 A woman wearing a baseball cap skis straight toward camera, looking into the lens.

There are two prints in the envelope: one original, and one made from a copy negative.

This photograph shows a woman skiing directly under the Red Chair on Whistler Mountain. 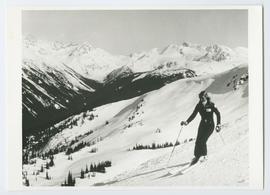 Woman Skiing with Bowls and Mountain Peaks in Background

A smiling woman in an instructor's uniform is seen skiing on a sunny day, with a backdrop of bowls and snow-capped peaks.