The Whistler Mountain News newsletters given out to guests and passholders in the Winter of 1993/1994. Articles include:

Photographs of Zonker the dog, the front porch and walkway of Tokum Corners, and Linda Whitehead.

Photographs of Pacific Great Eastern train tracks and Tokum Corners after they tore it down and cleared it out. It appears here as an empty lot. 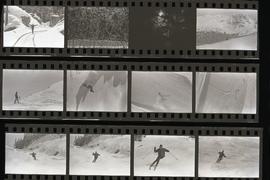 Photographs and negatives of a small party within a cabin, presumably Tokum Corners.