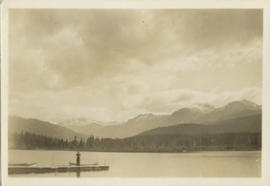 This photograph of Alta Lake, looking North, shows the surrounding mountains as well as the summer docks. Several boats are tied to the docks, on which an unidentified person stands. 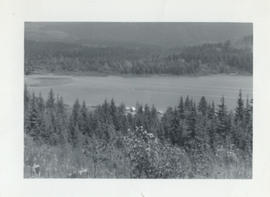 Alta Lake from Above Rainbow Lodge

This photograph shows a view of Alta Lake from above Rainbow Lodge. Although the photograph is dated 1944, the presence of what appear to be power lines in the foreground suggests that this may have been later, after the Rainbow Substation was built on Highway 99 in 1964-1965. 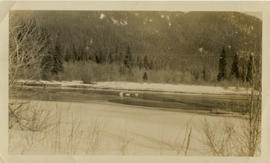 Swans on Alta Lake in the Winter

A photograph of Alta Lake in the Winter. Note the three swans on the lake. 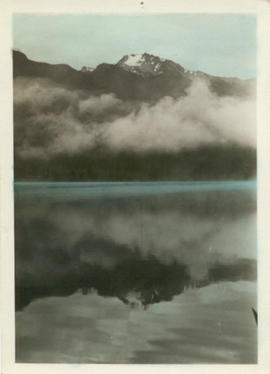 This handcoloured photograph shows the reflection of Whistler Mountain in Alta Lake. 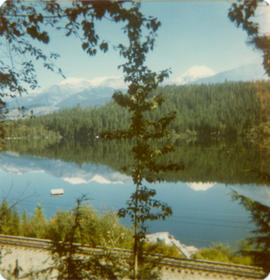 First Snow on the Peaks from Alta Lake

Four photographs stored together, made from two negatives (two prints from each negative). They are only slight variations on the same image of snow on the mountain peaks as seen from Alta Lake, with the railway tracks in the foreground. On the reverse of one of the prints is the following annotation: "First snow on the peaks late Sept- 1978 Alta Lake". 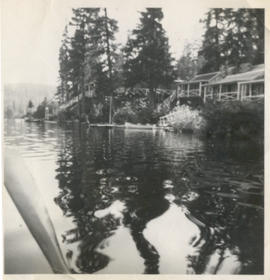 A view of Hillcrest Lodge, taken from Alta Lake. This lodge was owned by Jack and Cis Mansell, and later became Mt. Whistler Lodge. It was located on the east side of Alta Lake, south of Lakeside Beach.

Alta Lake in the summer from Myrtle Philip's cottage

Alex Philip and unknown friends outside west side cottage

Photograph of Alex Philip in front of the Rainbow Lodge Cottages

Whistler Mountain is visible in the background. The reverse of the photograph is annotated with "Alex, 1948." 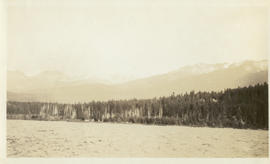 Across Alta Lake to the Barnfield's

This photograph shows Alta Lake in the summer, looking across the water toward the property owned by the Barnfields.