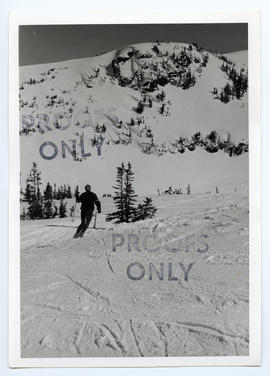 This photograph shows a Whistler Mountain ski instructor carving his way down a low grade slope.

Notes on the back give a category ("General Skiing") as well as a title ("Skier's Delight"). 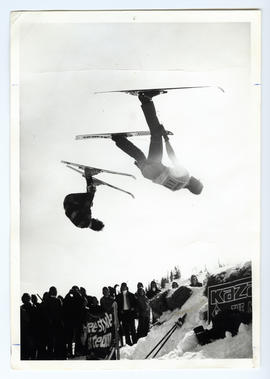 Two skiers are shown side by side in mid-air.

A typed note taped to the reverse of the print reads, "Michael Daigle, right, shows a front flip in tandem. -Garabaldi Freestyle Camp"

This photo was published in the Whistler News on page 10. 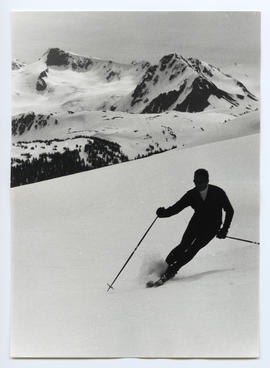 Male Skier with Peaks in Background

This photograph shows a male skier in the foreground, turning toward the camera, with a series of peaks forming the backdrop. 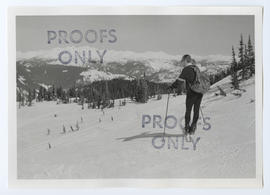 This photograph shows a skier standing at the top of a hill, looking at the skiable terrain below as well as the surrounding mountains. ' 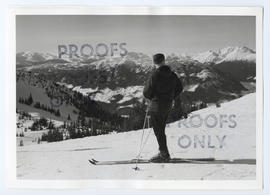 This photograph shows a skier standing at the top of a hill, looking out at the surrounding mountains.

Notes on the back give a category ("Skier's View") as well as a title ("Looking into Paradise").

Toni Sailer is seen skiing in between poles on a race course. Notes in a previous finding aid identify this as the 1969 Summer Ski Camp.

Three skiers are shown posing at the top of a run in the alpine.

Jim McConkey and Charles Graziano seen skiing down a steep, powdery slope during the filming of "Ski Crazy" in Alta, Utah.

Pierre Trudeau is shown turning on his skis on a snowy day. This photograph was taken on his honeymoon.

Pierre Trudeau is shown skiing across a slope on his honeymoon.