Photographs of Skier's Plaza in winter, Tony Biggen-Pund and Byron Gracie outside an alpine A-Frame that was used as a workshop and emergency shelter for the alpine T-bar on Whistler Mountain, a man skiing, a sign reading 'Garbage Estates - Choice Lots Available', Blackcomb Mountain in 1979, chairlift construction, and the Valley T-bar during a snowy day on May Long Weekend in Spring 1968, the Whistler Village site in 1978, construction of Whistler Village, Whistler Village in 1980, and early Blackcomb Mountain ski runs covered in snow.

Photographs of the cover of Skier's Magazine for September/October 1963 showing Willy Schaeffler and Franz Wilhelmsen at Whistler Mountain, the village during construction, Mayor Pat Carleton opening Blackcomb Mountain for business at 9am on Thursday, December 4, 1980 (He cut the ribbon attached to a chair on Lift #2 with a chainsaw), Pat Carleton giving the first chair of skiers on Blackcomb a push, Franz Wilhelmsen and Jim McConkey posing at Whistler Mountain with a few others, Late construction stages of Tyrol Lodge, and a kids ski camp on Whistler Mountain. 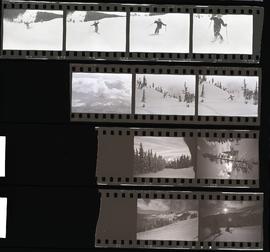 Photographs of T-Bar #2 after it was moved from the bottom of the mountain, Black Tusk, Red Chair, and skiing on Whistler Mountain.

Photographs depicting people on the chairlift and at the base of the lifts, mostly during the summer, and people standing in front of the mountain trails sign. 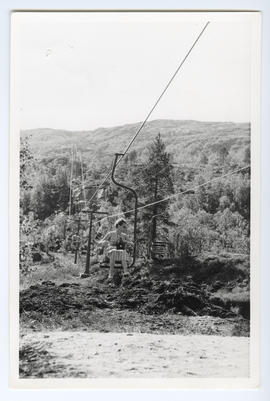 Several people are seen riding single chairs on a chairlift during the summer.

An annotation on the reverse of this print reads, "Chairlift with total length 2000' high difference 725' capasity [capacity] 300 person/h "one seats" chairs with fixed clamps".

"Let's remember an experience we all share. When riding a chairlift with tourists, when they find out you live here. The awe in their voice when they say "You live here?" That is our identity. These are our mountains + lakes + trails."

A card featuring a watercolour by Ann Hurst entitled "Seventh Heaven". Shows a busy chairlift at the bottom of the Seventh Heaven area.

Side View of Lift Stations

Several lift stations are shown at the top of Whistler Mountain.

A Ski Whistler pamphlet from 1970. The front panel has the Ski Whistler logo and a photograph of skiers riding a chairlift. The back panels contain a Whistler accommodation guide, a listing of dining facilities, a map of how to get to Whistler and instructions for access via road, rail, ship, air, bus and car rental services. An inside spread is a map of Whistler Mountain's ski runs which indicates the difficulty of each run. In the middle of the pamphlet is a large Ski Whistler spread that gives an overview of Whistler Mountain's ski facilities and village amenities, and 12 photos of skiers and locations on the mountain.