Prime Minister Pierre Elliott Trudeau being presented a Totem gift at the Roundhouse during a luncheon. The Prime Minister appears to be hosted by members of the 1976 Vancouver-Garibaldi Olympic Bid team and Whistler Mountain employees. 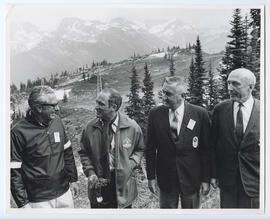 Pierre Trudeau is shown on his 1969 visit to view the Olympic site for the 1976 games bid. The other men in the photograph (from left to right) are Franz Wilhelmsen, Harold M. Wright, and Jean Brusset. 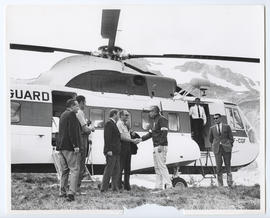 Franz Wilhelmsen is shown shaking the hand of Pierre Trudeau outside a helicopter in the alpine on Whistler Mountain during the summer. This was likely taken during his visit to view the proposed Olympic site for the 1976 games.