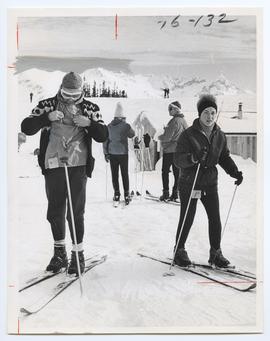 Group of Skiers at top of Lifts

This photograph shows several skiers at the top of the lifts. Three people are in the distant background, with two people standing in the middle ground, and two in the foreground. The man on the left in the foreground is arranging his clothing, while the woman looks into the camera, pushing forward with her ski poles.

This photograph shows a line of skiers waiting to load into the gondola, with two men in the foreground placing their skis into the holders on the exterior of one of the gondolas.

An annotation on the reverse of the print reads, "Late 60's. Gondola base Whistler Mtn."