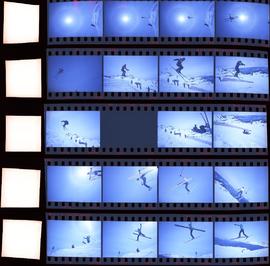 Photographs of ski jumping at the Gelandesprung contest. 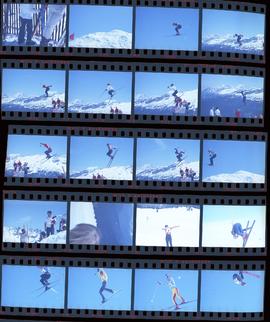 Photographs of ski jumps, a boat tied up at dock, Lower Traverse, and Alta Lake. 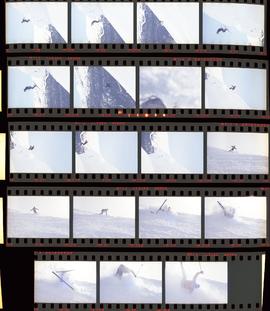 Photographs of cornices, a ski jump, and Drew Tait falling while skiing.

A 5 minute film directed by Peter Harvey for the 2009 Whistler Film Festival. Growing Up Whistler tells the story of what its like to grow up in Whistler and how some young local athletes are preparing to compete at the highest levels.

Photographs including but not limited to freestyle skiing; driving; and cars.

Photographs including but not limited to summer skiing into the lake (freestyle); Town Centre Construction
02-092-11. Pg. 3. Caption: Linda Satre accepts another donation to the Terry Fox fund from a patron outside the Husky Station while Ruth Howells looks on.
02-092-29. Pg. 6. Caption: [top left] Two jumpers unfold their flips
02-092-18. Pg. 6. Caption: [top right] Two jumpers unfold their flips
02-092-28. Pg. 6. Caption: [bottom] Masahito Tsunoki buckles into his lift vest.
02-092-33. Pg. 11. Caption: Dave Buchan -- new sales representative with the Capilano Highlands team since August 1.
02-092-7. Pg. [16] At the foot of Whistler... As in many cases, you've got to start at the bottom to get to the top. In this picture we have the crew putting the cable on the Garibaldi Lift's chairlift that rises from the Town Centre. Also shown is the pit that the two-mountain daylodge will rise from. It won't completed this year but the substructure will and portable trailers will be used on the site to sell lift tickets to Whistler and Blackcomb.

Photographs including but not limited to views and helicoptering around Black Tusk; ski races; mountain views; winter; Construction; ski race podium; construction; skiing; chairlift line-ups; World Cup Freestyle Championship; children
Appears in April 17, 1980 issue:
02-121-72. Pg. 5. Caption: READY FOR ACTION! Southwestern Contracting equipment stands ready to start another week on the Resort Centre excavation.
02-121-2. Pg. 8. Caption: Black Tusk as viewed from the South.
02-121-11. Pg. 9. Caption: B.C. Tel and B.C.R. towers on the west bluff of the Black Tusk.
Appears in the April 10, 1980 issue:
02-121-190. Pg. 1. Caption: W.M.S.C.'s Mike Carney from Squamish carves a turn in the Bob Parsons Memorial downhill race held on Whistler on April 1st. Results story on Page 5.
02-121-97. Pg. 2. Caption: Editor's Assistant B.J. (Brad) Cooper.
02-121-107. Pg. 5. Caption: Bob Parsons race winner Jamie Parsons, (right_ with him is Blair Gillespie of Vernon & WMSC's Rob Lahti.
02-121-29. Pg. 6. Caption: The roof beams of the new Blackcomb daylodge show the shape of the building.
02-121-66. Pg. [12] or back cover. Caption: WORM"S EYE VIEW of the new drugstore and office building in the town centre. This building should be one of the first to be finished this summer.

A Ski Canada Magazine from 1982 as a Special Whistler World Cup Issue.
Table of Contents:
18 Whistler Welcomes the World - Everything's in place for Whistler's second attempt at staging a World Cup Downhill and if the weather cooperates it could be the start of something big.
23 Is Downhill Too Dangerous? - World Cup courses have not kept up with racing technology. The result: as speeds increase so do the number of injuries.
28 The Racers - Podborski, Mueller, Weirather and Read are household names in Europe. At Whistler they'll be the racers to watch.
33 The Race - For neophyte race watcher a World Cup downhill can be a confusing experience. These tips from a veteran race watcher tell you how to get the most out of the event.
35 The Course - Whistler's new downhill course is the second longest on the circuit and offers spectators plenty of opportunities to catch the action. Here's what to look for.
36 Bindings '82: Poised for a Leap into the Future - The mainstays are still there, but this year may be the turning point in ski binding development.
50 Club Med Strikes Gold at Copper Mountain - They've go a hit on their hands down in Colorado as French panache and American showmanship bring out the best in the Club Med formula.
41 Take the Powder Plunge - If you've been postponing your heli-skiing trip because you aren't sure you can handle the deep stuff, take heart. It's not as difficult as it looks.
56 Tod: The Mountain That Would be King - With its abundance of snow, endless terrain and colorful history, B.C.'s Tod Mountain should be a storybook development. Why it isn't is a story in itself.
66 Ready for a Shot at the Top - No longer the also-rans of our national team, a new breed of women are ready to prove they belong on the World Cup circuit.
6 First Tracks - Whistler World Cup important on three fronts
9 Short Turns- News and Notes from the skiing world.
15 Equipment - Re-inventing the perfect ski pole.
74 Racing Tips with Peter Duncan - Preparing for racing.
78 Last Run

Photographs of Dag Aabye and skiers on Whistler Mountain; lakes, roads, and logs in Squamish; and camping in Pemberton.

Transparencies are coded with "WZ", "MZ", or "ML" and with a respective number.

A Park Rider Sessions poster for 2014/2015. Images feature a skier and a snowboarder. Sponsored by Milk 2 Go. Registration information is listed underneath, along with the logos of smaller sponsors.