A "Joy Ride" in Florida

Item is a postcard labelled "A "Joy Ride" in Florida," sent from Aunt [Margaret?] in Leesburg, Florida to Bobbie Neilan [sic] at 35 1/2 Mile. The front of the card has an image of 9 African-American children riding a large alligator along a palm tree-lined stream.

On the back of the card is a handwritten message from the sender to her nephew Robert Jardine-Neiland. In the top left-hand corner is a printed poem. There is a green one-cent American postage stamp in the top right corner. The card is postmarked February 27 9 PM 1935 in Leesburg.

Postcard labelled "Burns' Statue Square, Ayr," sent from Aunty Mary (Mary Rutherford?) in Ayr, Scotland to Bobby Jardine at 35 1/2 Mile. The front of the card has a tinted photograph of a square with buildings, horse-drawn carriages and a statue of Robert Burns.

On the back of the card is a handwritten message from Aunt Mary to Robert Jardine. There is a red one-cent British stamp in the top right corner. The card is postmarked 4.30 PM October 6 1923 in Ayr. 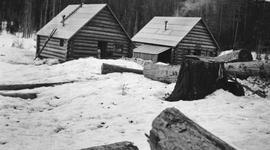 Photograph of the Neiland house at Alpha Lake. This was their house in their first logging operation at Alpha Lake (Mile 35 1/2) before they moved to the Function Junction area (Mile 34 1/2).